How to Design Runners That Scale Using Gitlab-CI (Part 1)

This article focuses on how to design your Gitlab Runners to achieve optimum CI efficiency. 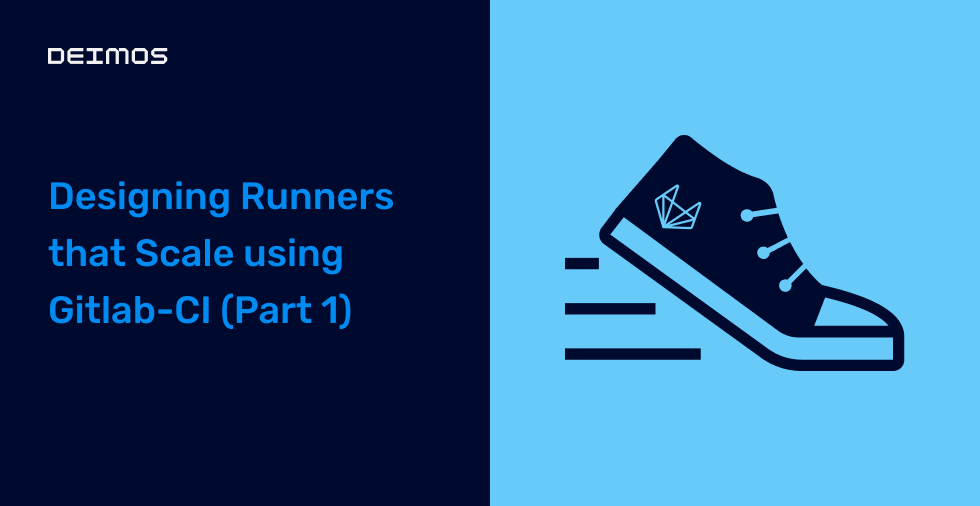 CI/CD (Continuous Integration/Continuous Delivery) forms an important part of software development and release processes by introducing automation to help with code integration, testing, and deployments. There are several CI/CD platforms with different setups. It is important that whatever platform and architecture are used for running CI/CD jobs, the efficiency of running jobs isn’t impacted even in events where the number of jobs spikes. This article focuses on how to design your Gitlab Runners to achieve optimum CI efficiency. 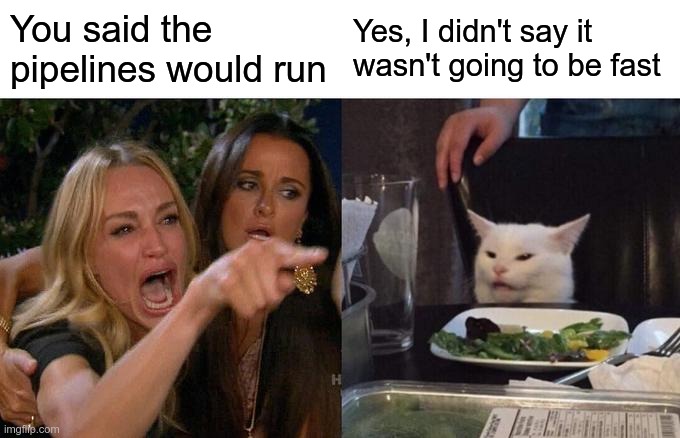 On the GitLab platforms, Runners are used to execute jobs.  These runners listen for jobs on the GitLab instance and execute those jobs on configured instances, VMs, Shell, or docker containers. Although GitLab provides shared runners (for SaaS Gitlab), you can additionally configure your runners to execute your jobs. Bringing your own runners gives you the flexibility of configuring them to your needs.

Creating and Configuring a simple Runner

Before biting deep into this big Gitlab-Runner Design Pizza, let’s take a quick peek at how to create a basic runner. Creating a self-hosted runner requires the following steps: 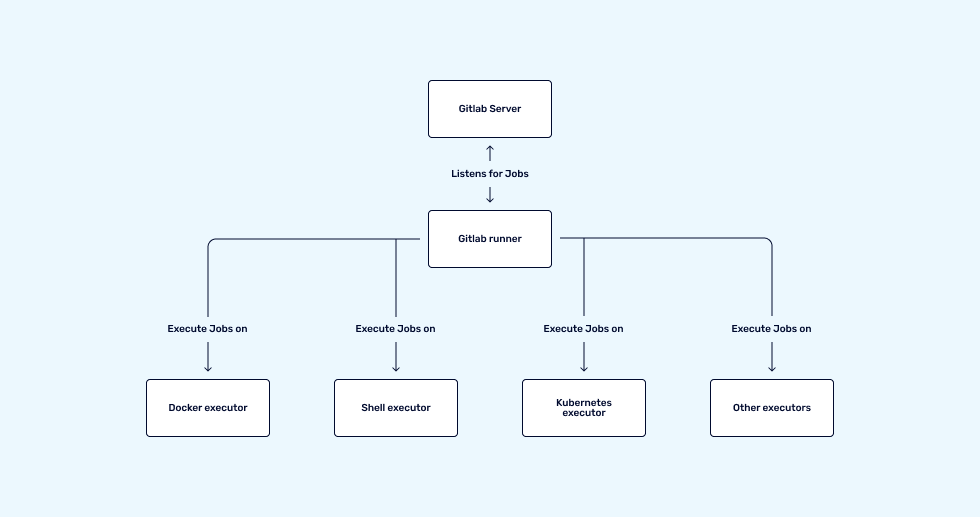 The Gitlab Runner listens for jobs from the GitLab Server. Once there is an available job, it schedules it on any configured executor. An executor is akin to the platform and method that executes the received job. This executor could be a docker (which runs the jobs in a docker container),  Virtualbox (to run the jobs in VirtualBox), the shell (which runs jobs in the local shell), or even a Kubernetes (to run the jobs in Kubernetes pods) among others. The runner monitors the jobs and reports logs and status of the jobs to the Gitlab server. Several executors can be configured for a given instance, and several instances of the same executor can also be deployed. For instance, you can have two runners all configured to run the docker executor.

Below is a sample Gitlab Runner configuration with three executors; Kubernetes, docker, and shell.

Having understood the architecture of the Gitlab Runner, let us look at some areas where a GitLab runner setup might fall short in terms of efficiency.

There are different types of executors as earlier listed (Docker, Kubernetes pods, shell, VMs), etc. Depending on your use case, your choice of runners might be different. However, internally, we’ve found running jobs in Docker containers (docker, Kubernetes pod) enough to cater to all CI needs. For executors to run, they need a host VM. However, if there are no jobs actively running, then that VM goes on inquiring costs without being used. Additionally, in cases where there is a spike in active jobs, the execution of one job shouldn’t affect the other or drain the resources (CPU and memory) required by the other jobs. If such happens, the jobs get slower and developers get frustrated. Hence the first problem: we need to also be able to scale the machines running the jobs up to accommodate all jobs while ensuring each job execution does not affect the execution of another and also scale down when there are no active jobs.

With more and more jobs getting triggered in the GitLab instance, the runner schedules more jobs. However, there is a limit of jobs each runner can manage. This is defined as the concurrency in the config.toml file. Why is this a problem?

If an executor has a concurrency of 10, and there are 20 jobs currently triggered in the GitLab instance, only 10 of those jobs will be executed at once. Any remaining job will queue up and wait for an existing job to be completed before being scheduled in any freed_up spot. This increases overall CI time and negatively impacts developer experience.

But, hey, can we not configure the runner to run a high number of jobs, say 50 or even 100? Yes we can, but this will require more static resources (memory and CPU). And what if only five jobs are executed? Or events of public holidays when no jobs get executed? The large allocated resources go to waste. The second task thus is to be able to scale the runner up and down depending on the number of jobs currently triggered in the Gitlab instance.

For this problem, our choice of executors affects our scalability. Having tried most of the executors, we have found the Kubernetes and Docker+machine executors the best and easily scaled solutions.

Using and Scaling the Kubernetes Executor 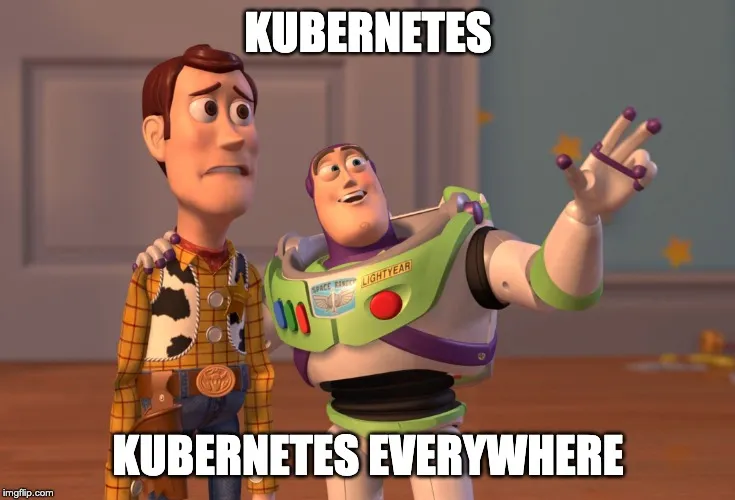 One of the many features Kubernetes offers is the ability to scale your cluster up and down according to the load on it via the cluster autoscaler. Cluster Autoscalers ensure your cluster can scale up by provisioning more nodes as required up to a particular limit and also ensuring it scales them back down when no pod is scheduled on the nodes. Hence, having the cluster-autoscaler installed and configured in the cluster is the first step to properly architecting this solution.

Some managed Kubernetes clusters like GKE provide options to configure this autoscaling when creating your cluster or nodes. And by doing so removes the burden of you configuring it yourself. With the cluster-autoscaler configured, we can proceed.

When using the Kubernetes Executor, ensure that the GitLab jobs do not interfere with the normal execution of other services in the cluster. This is achieved by ensuring that the jobs run on dedicated nodes (which will be scaled up and down) and that appropriate network policies are applied where necessary.

The remaining part of this section uses GKE as a reference, but the steps should be the same on other managed Kubernetes clusters. 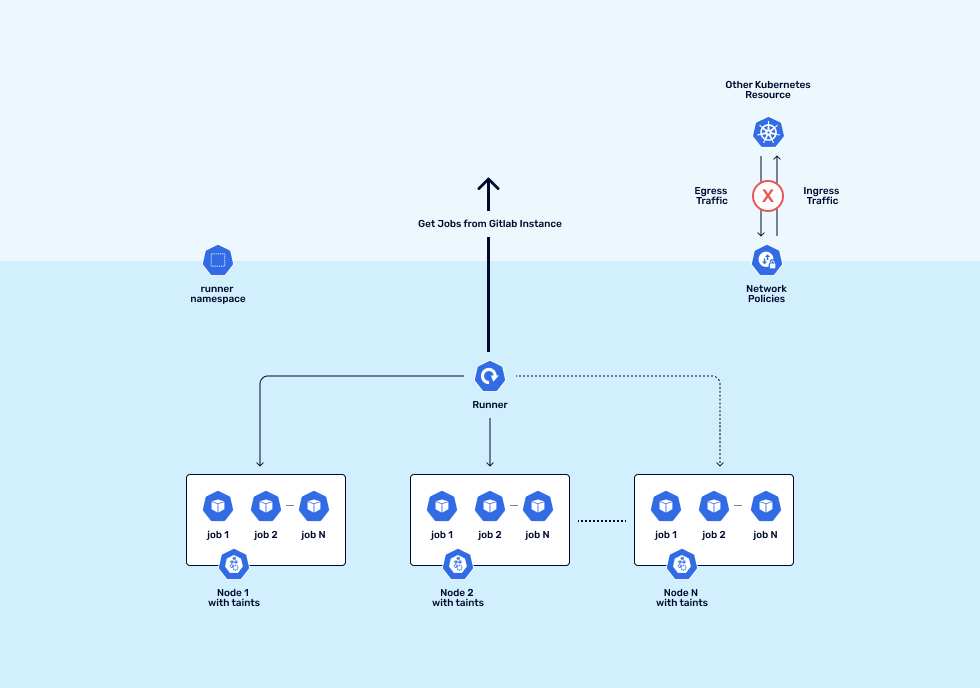 To ensure we can scale our executor, we need to configure the cluster as follows:

Create a new node pool (node group) with node autoscaling enabled via the cluster autoscaler, with a minimum number of nodes set to 0: this will allow the nodes to scale down to zero when no jobs are being executed, such as during weekends or after the close of business. 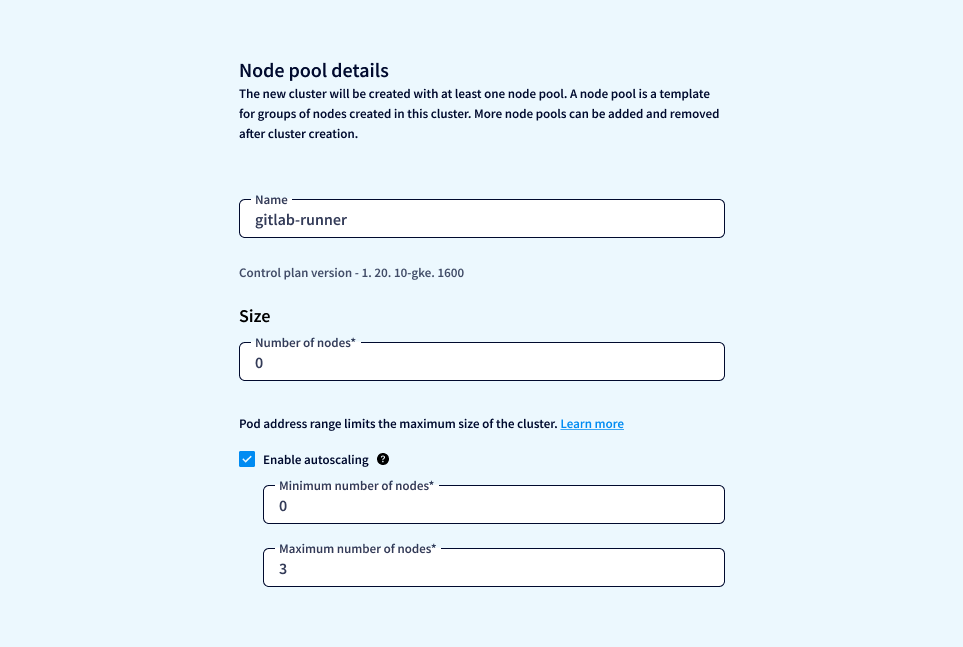 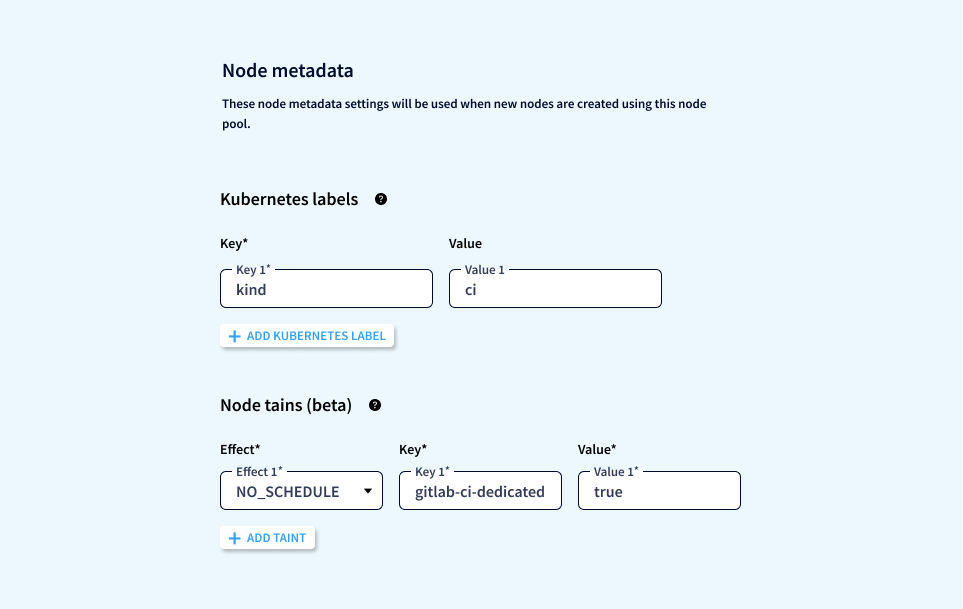 If the nodes are deployed with a taint gitlab-ci-dedicated=true and have labels kind=ci, we can then have a sample gitlab runner configuration as:

With this configured, we have a setup that scales up to a limit, which we define and can scale down to zero when no jobs are running/scheduled.

For an easy way to configure this on your cluster via infrastructure as Code(Terraform), check out this module and the examples in our terraform modules gitlab-runner terraform repo.

The docker+machine executor uses the docker-machine. A tool, which spins up new VMs/instances on cloud platforms and runs docker in them. When a new job is received, the docker+machine spins up a new vm to run the job. That means the number of running VMs is equivalent to the number of jobs. Also, each VM runs a single job (docker container), hence there is no contention for CPU and memory resources.

The docker-machine repository is deprecated. However, the Gitlab Team has an active Fork which it actively maintains and adds new features to. Configuring the docker+machine executor is dependent on the cloud platform you use. A sample GitLab runner config for GCP docker+machine Executor is shown below:

Since each job is executed in isolated VMs, choosing the ideal size for your executor VMs becomes very important. Your choice of VM type should depend on the job executed and the cost of the VM. For GCP, you could consider choosing the N1-standard-1 for a start and scale up when required. You can have different runners with tags configured to run on heavy VMs and another on light-weight VMs. You can then configure jobs to run on runners using specific tags.

Certain factors can influence the choice of going with a Docker+machine Executor or a Kubernetes Executor. However, as opposed to other executors, these two executors ensure proper scalability and isolation of jobs, making them the ideal choice for anyone looking to set up  Organization GitLab Runners.

As stated earlier, this is the first part of designing GitLab Runners that scale. For some use cases, this setup is enough to improve CI performance and conserve cost. There are cases where there are job spikes that overwhelm the capacity of your runners, resulting in lots of CI Jobs queued and waiting for jobs to finish. For such cases, as earlier discussed, we’ll need to scale the runners so that more runners can handle more jobs concurrently, increasing the overall developer experience. For that, watch out for the next part of the series.

LinkedInTwitter
or copy the link
https://deimos.io/post/how-to-design-runners-that-scale-using-gitlab-ci-part-1