As we try to build a sustainable company, a company that continues to exist and adds value, a lot of advice, tips, and tricks are shared along the way. On how to navigate all... 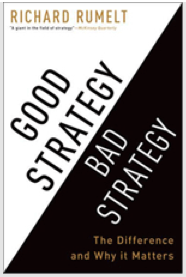 As we try to build a sustainable company, a company that continues to exist and adds value, a lot of advice, tips, and tricks are shared along the way. On how to navigate all the advice given is a separate conversation for another day.

One piece of advice & encouragement I often receive is to read more. A good idea, as most past lessons have already been learned the hard way by someone else. Learning from others’ mistakes and insights can often save us from ourselves.

My current read is “Good Strategy, Bad Strategy”, by Richard Rumelt. Not your typical startup book. I’m pretty sure you wouldn’t find it on any trending lists for tech books either. There are no catchy industry buzz words or “innovative/ disruptive” trends. It’s a book about cutting through the jargon, facing your challenge head-on, thinking deeper and then some more thinking.

To be honest, the book has been a hard read. Not a hard read because the content is difficult, but a hard read because it forced me to face some business basics I had ignored or missed. This is the first book that I have read where the cringe for myself was real. Good. Because we can only be better when we are out of our comfort or confident zone. If we are lucky there should be time and space to improve and do better.

The book itself is full of insight and I could never do it justice in a review. If you are building, please make some time to read this book, and reach out to me if you like. I would love to discuss it with you.

The context is all about strategy. What it’s not, what it is, and the plain and simple truth right at its centre. If you want to win, if you want to succeed at anything, then you better have a good strategy.

Today I read about change. It is too good not to share. To be fair, this was one of the most fundamentally important changes to human society and these don’t come about all that often. Nevertheless the lesson is clear, and there are changes happening today, right now, that affects us all, albeit in arguably more subtle ways.

In Chapter 13, Using Dynamics, There is a topic titled “Cisco Systems rides the wave”.

It contains a fascinating story about a group of Stanford staff members who started a new company, only to see it rise to such a level that it stole the market right from “under the nose” of industry giants.

Before the Internet Protocol for ARPANET, the precursor to the internet, each giant had and was using their own networking protocols.

Rumelt writes that, “IP was pure logic, it had no wires or connectors, no timing specifications or hardware. Plus, it was free and no company’s proprietary product.” … “IT departments began to see value in a protocol that was vendor neutral. Increasingly, corporations made IP their backbone network protocol and at the same time, Cisco began to make IP the central hub protocol on its routers.”

He continues on to say that, “Critically, none of the industry incumbents jumped to forcefully occupy this space. Each had its own proprietary network protocol and each was loath to totally abandon it.”

In short, as an outcome of its foresight and the inability of the incumbents to not let go, Cisco stole the market.

“Absent the powerful waves of change sweeping through computing and telecommunications, Cisco would have remained a small niche player. Cisco’s managers and technologists were very skilful at identifying and exploiting these waves of change and were lucky enough to make no fateful blunders… Various incumbents were held in check by their own inertia, their strategies of supporting a single or a proprietary protocol, and by the very rapidity of change.”

It is exceedingly easy to become apathetic when faced with the rate at which technology changes. History is a keen reminder of how we like to cling to the past, of how protective we can be about the things we’ve built and the things we have done. Today, more than ever before, I believe in this lesson because it rings true. The rate at which software, the public clouds, and the technologies and patterns that power them are changing, can be overwhelming.

As we build, let this serve as a reminder that we should be careful about hanging on to the past. Yes, there is safety to be found there because it is familiar to us. But we need to be vigilant. In this sea of change, where a single wave can capsize even industry giants, you sometimes have to let go to win.

The market, the conceptual pieces that move, are more important than any specific product, codebase, or protocol. The cost of change, reimplementation or refactoring, while substantial, should never hold us back from catching the wave of change.

LinkedInTwitter
or copy the link
https://deimos.io/post/letting-go